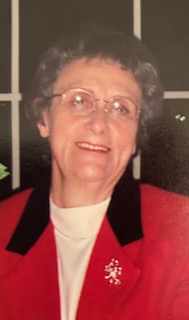 She was born on March 18, 1931, in Byrnedale, a daughter of the late Armando and Bena Pirazzi Gavazzi.

Mrs. Luzier worked at Quality Components for many years.  She was a dedicated wife, mother, and grandmother who enjoyed cooking and baking. She took pride in organizing her family reunions, and loved nothing more than spending time with her family.

She is survived by two daughters; Cheryl Kotalac and her husband Bill of St. Marys and Debbie Luzier of Ohio, and by one son; Richard F. Luzier and his wife Carol of St. Marys.  She is also survived by three grandchildren; Chris (Kelly) Copeland, Melissa Luzier, and Richie Luzier, as well as by one great-grandson; Hudson Copeland.

In addition to her parents and husband, she was preceded in death by two brothers; Aldo and Herman Gavazzi.

Friends and Family will be received at the St. Leo’s Church Gathering Space from 10:00 AM until the time of the Mass.

Memorial Contributions may be made to Penn Highlands Hospice or to St. Leo Magnus Catholic Church.

Krise Funeral Home and Cremation Services is handling the arrangements and online condolences may be made to the family at www.krisefuneralhome.com.

To order memorial trees or send flowers to the family in memory of Anita T. Luzier, please visit our flower store.