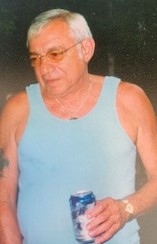 He was born April 17. 1941, in Fairmont City, a son of the late James and Martha Beaty Constable.

On May 1, 1981, he married Mary Dinsmore Constable, who survives of Kersey.

Joe was a member of St. Boniface Church and served in the U.S. Navy from 1961-1965.  He was employed by the Stackpole Carbon Company and then retired from Windfall after many years of service.  He was a member of the Marienville VFW.

He was an avid hunter and fisherman and could often be found spending time with his lifelong best friend, John Erich.  Joe greatly enjoyed his daily walks in the Fox Township Park.  He took great pride in building picnic tables, benches, and most especially, his camp.

In addition to his parents, he was preceded in death by a sister; Philomenia Craig.

Military Honors will be accorded by the Fox Township Burial Detail.

Family and friends will be received in the St. Boniface Church Gathering Space from 10:00 AM until the time of the Mass.

Memorial Contributions may be made to Penn Highlands Hospice or to the Fox Township Park.

Krise Funeral Home and Cremation Services is handling the arrangements and online condolences may be made to the family at www.krisefuneralhome.com.

To order memorial trees or send flowers to the family in memory of Joseph A. Constable, please visit our flower store.