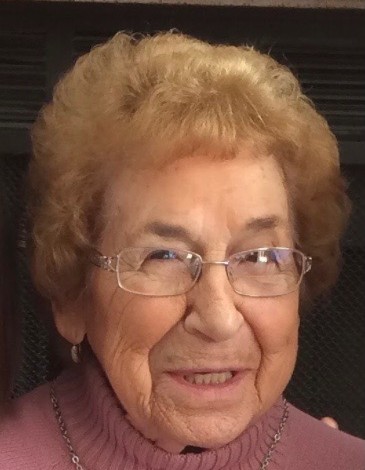 She was born on April 5, 1928, in Dubois, a daughter of the late Stephen and Marie LaFarro.

On October 31, 1950, in Holy Rosary Church, she married Batiste “Kack” Franco, who proceeded her in death July 13, 2014.  They’ll be celebrating their 70th wedding anniversary together in Heaven.

Steffie was a lifelong resident of Johnsonburg and graduate of Johnsonburg High School.  She was a member of the Holy Rosary Church, where she volunteered with the funeral luncheon committee.  Over the years, she was member at the Johnsonburg Senior Center and was a volunteer with the Meals and Wheels program. Steffie will be fondly remembered as the operator of Franco’s Restaurant and for the beautiful bouquets she made at the Lyn-Clare Flower Shop. As well as enjoying time with her family, she loved to cook and bake. Playing cards with her family was one of her favorite past times. She also loved working outside in her garden and tending to her flowers.

In addition to her husband and parents, she was preceded in death by two sisters; Theresa Maloney and Jenny Iorfida, two brothers; Samuel LaFarr and Santo Dragone, and by her step-father; Carmen Dragone.

A Mass of Christian Burial for Stephana C. “Steffie” Franco will be celebrated at 10:00 AM on Thursday, October 15, 2020, at Holy Rosary Church, 210 Bridge Street, Johnsonburg, PA 15845 with Rev. David Wilson, Pastor, officiating.

Family and friends will be received at Holy Rosary Church on Thursday from 9:00 AM until the time of Mass.

Krise Funeral Home, 130 Center Street, Ridgway, PA 15853 is handling the arrangements and online condolences may be made to the family at www.krisefuneralhome.com

To order memorial trees or send flowers to the family in memory of Stephana "Steffie" Franco, please visit our flower store.