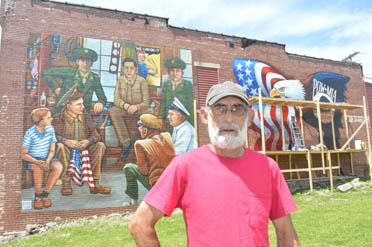 Tom graduated from Ridgway Area High School in 1971 and the Art Institute of Pittsburgh in 1973. Art was Tom’s greatest talent as evidenced by the many murals he painted in Kissimmee, Florida during the 25 years he lived there. From a mural that covered a city block to a full beach scene on a sand dollar, Tom captured life by his art. In 2005, Tom came home to Ridgway, and continued creating beautiful murals in Johnsonburg. Tom was also an artist whose paintings were featured in the gallery and a show presented at ECCOTA in Ridgway. In addition to painting, Tom made intricate and beautiful creations by wood carving and sandblasting. Tom’s paper route provided the money with which he purchased his first guitar – music was also a love and talent from a young age.

Tom is survived by his fiancée, Linda Murry of Ridgway; his Magrini family, Babs, Joe, and Laura; his daughter, Scarlett Cabanaw; his son, Joshua Copella; his granddaughter, Morgan Cabanaw; his brother Jim (Delcine) Copella; his sister, Pam (Craig) Wriglesworth; and his sister, Cindy (Dave) Parsons, as well as numerous nieces and nephews.

In addition to his parents, Tom was preceded in death by Robert Magrini.

Tom was the comedian at many a family gathering and gave us all many smiles and belly laughs. We love him dearly and will miss him greatly.

Friends will be received at the funeral home from 1:00 p.m. until time of the service.

To order memorial trees or send flowers to the family in memory of Thomas E. Copella, please visit our flower store.